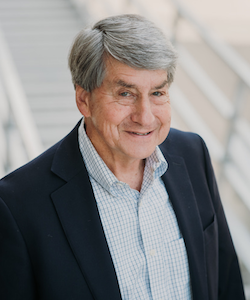 Rich brings with him over 50 years of experience as a fierce advocate concentrating his practice focus on civil litigation, consisting primarily of personal injury, wrongful death, and corporate litigation.

Rich has been a longtime supporter of the legal profession, including a term as President of the Indiana State Bar Association (2006-2007), as well as numerous other roles within the bar, along with organizations supporting trial advocacy. Rich has been selected as an Indiana "Super Lawyer" by Law and Politics Magazine every year since 2008, and was named a Top Attorney in Indiana in March 2009 by Indianapolis Monthly Magazine.

Rich has been involved with numerous civic activities in Columbus, including Y-Med (Young Mother Educational Development), Girls Club, Meridian Kiwanis, Family Services and the Columbus Indiana Philharmonic. He is also an active member of First Presbyterian Church, having served on many committees, including serving as a deacon and an elder.

Contact Us
Practice Areas
Client Reviews
★★★★★
"My experience with Beck Rocker & Habig went beyond expectations. I had never required legal services before my incident so I didn't know what to expect. Ashley and her team went out of their way to make the whole process as easy as it could be for their client. They exhibited a real concern for my health and well being and handled my case with integrity and professionalism. They have taken care of all the details and were very responsive to all my questions, and there were many of those. If I am ever again in need of legal services, Beck Rocker & Habig will be the firm I shall call! Thank you." D.W.
★★★★★
"Jeff Rocker - Excellent Attorney in Columbus, IN - Jeff Rocker has assisted my family on issues and I have had the pleasure to work with him through my company. He was extremely knowledgable in business law and explains it to his clients in easy to understand language. He has a solid reputation with the personnel in the courthouse and city hall. Not only does he have extensive knowledge in family and business law, but he has a "down to earth" personality that truly shines through. Often times people are afraid of attorneys or relunctant to seek advice from one, but Jeff Rocker makes you feel at ease the minute you meet him. He truly wants to help people and represent them in the best light he can." Dona
★★★★★
"Mr. Rocker has been nothing short of extraordinary in handling my affairs and the affairs of my company. As having been caught up in the real estate bubble several years back, my company has had its share of turmoil. Mr. Rocker has been there and continues to be here every step of the way. In addition to company issues that stemmed from the "bubble" bursting, personal issues have come my way as well. Jeff has handled each case with the utmost attention to detail. He continues to carefully explain his thought process and strategy in dealing with each situation as if it and I were his only case." Fred
VIEW MORE
Submit a Law Firm Client Review